On Earth As It Is 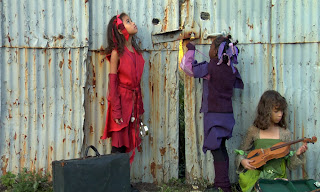 There's a yard near where we live, a huge one by New York standards, but the grass we're told is  “ornamental”. Still it's often by far the best place to play. It's fenced in so cars whiz past without posing a hazard. There are people around but none of that dreadful playground mingling. No negotiating over toy trucks and sand shovels. No adults budding in saying "Not too rough" or "Not too close" or "Say you're sorry". Just playing. Sometimes with a ball. Sometimes rolling down the hill. Sometimes just picking up acorns and throwing them against a tree to hear the pleasing little crack. Away from playgrounds, play dates, playrooms, play groups and play therapy, there is a thing called playing that still exists. Kids seem to know how to do it so if you're not sure, just let them loose and watch them.
That's what my friend Kristin did--albeit with beautiful costumes and hidden treasures--in her movie Spirit Ship to be released in the Spring of 2011. The 15 min HD/Super 8  film was shot on location in Red Hook. You can find the Kickstarter project here. I asked Kristin some questions about the project. I couldn't come up with any good ones. They were either too generic or too quirky. Finally I just sent some to get on with it. She graciously told me the whole story: how she balances life as a mom and artist, how she set out to teach and found herself making films, what she thought about what I thought about the film (which is brilliant, lovely and a little spookier than one might  expect). Here's what she said.
How did you come up with the idea for the movie?
First here’s a little back story:  My husband Sean and I have been making videos with children, about their imaginative play and stories, for 11 years.  When I first moved to New York I taught art in public schools, spearheading grant projects within which I used video to enhance the early childhood curriculum.  By 2007 or so I began to become exhausted (by grantwriting, teaching, editing, hustling new projects) and troubled by the amount of inevitably unfunded hours it took to attain a viewable product.  I had somehow evolved to think more like a filmmaker and less like an educator, in that I was getting distracted by the product itself.  But if I looked at it another way, the product was begging to be made as well as it could be. Why spend so much effort making sub-par videos (the only kinds these school/grant budgets would afford) of kids' stories and play, if good ones were possible?  I also began to look at the work in the context of children’s media: there were so many animated shows out there for kids, of both high and low quality, but where was the live-action?  There were just too many reasons to stop “teaching” this in schools and start producing professional quality films.  One thing I knew, and still believe: Kids are so influenced by the media they’re seeing on TV, and in many instances, much more so than they are influenced by their schools.  This varies, of course, but for the kids I was working with, in public schools in less affluent neighborhoods (ie: Red Hook, Bed-Stuy, Brownsville, East New York), they often had A. a lot of exposure to TV and B. not enough wonderful learning experiences in the classroom. What would any kid be left to extrapolate from that?  Well, how about “school’s not that great but TV sure is exciting,” for one?
So then we arrive at Spirit Ship itself:  the film as a concept was born out of my feeling of desperation about working in schools, and my need to start again from the ground up.  So during the summer of 2008 I decided that I needed to make a film that was short enough to shoot in a weekend or so, that could be edited quickly, and that could function as Little Creatures’ first “real” film, or proof-of-concept.  I picked six children I knew and called them together for a story-planning meeting in Prospect Park. I just told them the premise, that we were going to make a movie together in the Fall, and I presented some of the props we’d be using—I remember taking the old violin.  I asked them for story ideas and started recording and taking notes.  The kids’ ideas (several of which I really want to include on the Little Creatures’ blog, stay tuned for those) informed my thinking as I worked on the beginning of a story.  It continued evolving, and soon it seemed inevitable that two mysterious groups of children would be walking through parallel worlds, unable to see each other.  I met with Damaris Cozza in September, and she helped me take the story to another level.  Sean, my husband and sometime-collaborator (I call him my reluctant partner, as in so many ways he really is the co-founder of Little Creatures, though we called it Digital Story Workshop back in ’01.  He’s been the brains behind so much of the work, and without him I wouldn’t have been able to get to this point!), also contributed to what became the story of Spirit Ship. 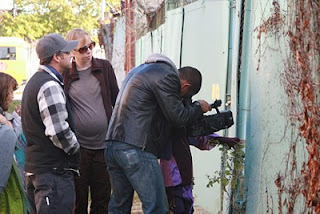 How much of a structure did you start with? Did you have any kind of a script?
With Damaris’s and Sean’s help, I wrote a two-page treatment.  There was no script, but we did develop a very extensive shot list from the treatment.  By the time of the shoot (October ’08), the children had a vague idea that we would be having and filming a mysterious adventure, but they had no conception of the story.  I did not want them to know anything about the story, I just wanted them to respond to the props we hid for them to find, just as kids had done in "Ark" (2002) and "Mysteries in the Woods" (2006-ongoing).  I wanted them to have the freedom to play in a way that was authentic to them.  But given the massive requirements of "making a movie" (crew, equipment, lots of time passing for every task and shot), this became a shaky line, a delicate balance.  If a crew was watching and listening closely to them at every turn, could the children's play ever be truly authentic?  This is a question I’m grappling with now as I think about possible future projects.  By no means do I intend to relinquish the educational goals that drive the work, or forget all the education theory I’ve learned or the extensive classroom experience that informs the work.  The main driving educational concept at issue is that children learn through their play.  This work aims to empower them and inspire them to play harder and think longer about a range of fantastical possibilities, so that ultimately, their play will grow in complexity, and there will be a cultural shift of enhanced social/emotional/intellectual development (well, gosh that sure sounds grandiose, but you get the idea).  Oh, and we’ll all get some pretty children’s films out of the deal.
How did you achieve the dream-like feel?
I am captivated by children when they are still not "grown up" enough to have a perspective of self-judgment:  their art and stories are absolutely winsome and engaging, and the progression of events in the stories they tell are often quite disparate, even bizarre.  Children who are in the throes of their imagination are already living inside a dream.  So anytime I create a film, what informs my thinking is years of sitting with little children and listening, taking dictation, recording and transcribing the words of four, five and six-year-olds telling elaborate, original stories.  These stories are all self-contained dreams, and they inspire me to create worlds that children might want to fall into as they fall into their own stories--with abandon, and no care for structure, syntax or storyline that has a defined beginning, middle and end.
Aside from the dreamlife of children’s minds, there is a personal aesthetic that’s going on here too.  If you look at my other videos, all the way back to '01 and '02, you'll see some common denominators:  flowy dresses, natural objects, outdoor spaces.  Spirit Ship is in many ways simply an inevitable progression from all I had done before.  For all my films I design shots as if they were paintings, imagining children wearing particular costumes so they will stand out dramatically against the backdrop of the natural landscape, or, in the case of Spirit Ship, a post-industrial wasteland.  If you go to Red Hook, the neighborhood in Brooklyn where we shot Spirit Ship, you will experience a seemingly forgotten mystery-land by the sea, a place with cobblestone streets, empty lots, eccentric houses with strange hand-painted signs out front, a place that seems all-too-quiet, to caught in the past, or washed up on shore, to actually exist within New York City.  Aside from its nostalgic character, the main attraction of Red Hook is still the waterfront itself, which features waves crashing on a shore, adjacent to the crumbling factories from eras past.  So needless to say, living in Red Hook is a bit like living in a dream.  I could only hope to do the place justice by giving the film some dreamlike qualities.
Who are the actors?
The six children were from Brooklyn and Staten Island, and two were from the neighborhood of Red Hook where I live and where we shot the film.  Two were children of friends and the other four were former art or video students of mine.  Heaven Griem (6 years old when we shot the film, now 8), Maya (10) and Lindsy (9) Lee played the "Earth Children," and Sophia Georgiou (4), Anastasia Shaw (5) and Milo Hughes (10) played the "Spirit Children."
Have they seen the film? How did they react?   They have seen the film evolve over the two years that we have been in post-production.  We are at work planning a first screening of the final film for them, which will take place as soon as the final sound is complete. 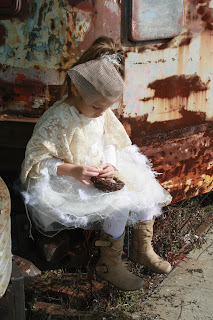 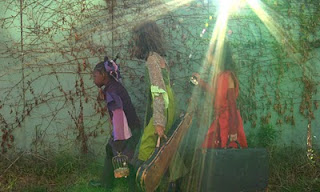 The idea of "discovering another world" is so redolent of adventure and yet here you've managed to conflate that "other world", almost like a kingdom in a child's game or secret garden or something along those lines, with an after world, quite possibly a terrifying thought for young people (not that they're not used to being scared in just about every fairy tale and nursery rhyme out there). I would say you mostly transform that fear, merging lost with found, past with future, what came before with what comes after. Yet to me, something still lingers, maybe more of a feeling than anything. A spookiness, and unanswered question, a mystery--the beginning of a new story.
I’m so happy to hear what you’re saying.  That transformation, that merging, was absolutely my intention.  It came about a bit more intuitively than your words just now, but upon hearing this I think, “that is exactly it.”  I hope children will come back with more questions, then even more.  The film is designed to get kids asking, and to remind adults that the questions are more important than the answers.  It sounds like the lingering feelings will keep you coming back for our next installment of Little Creatures, and for that I’m thankful, and can’t wait.
Email Post 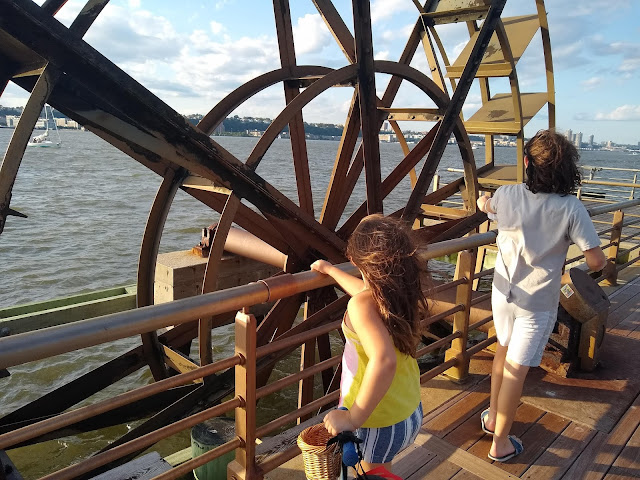 Welcome to You Are Journey